Every 20 years or so, Southern California (namely, Los Angeles) falls victim to some of the largest earthquakes in the world. The last major one, on January 17th, 1994, was the costliest in U.S. history, and broke records on the North American continent. If you weren’t in the area at that time, just take a look at these photos, which show the intense devastation the earthquake did to the San Fernando Valley and Sylmar areas (among many others). That was almost 24 years ago. If you didn’t already do the math, we’re four years overdue.

That catastrophic quake allowed us to learn a lot more than we knew previously. But even with advancements in technology, we can only predict an earthquake a few minutes before (if we’re lucky). Today, September 6th, 2017, the Sun unleashed its strongest flare in a decade- predicted to cause a geomagnetic storm (and possibly other natural disasters) on September 8th. While there is no concrete evidence to provide a definitive answer, many studies have pointed to the correlation (if not causation) of earthquakes by solar flares. This is not to make you believe that doomsday has finally arrived (though better safe than sorry, right? Haha). It’s just to help Californians understand that any day we could be expecting one of the bigger earthquakes in California history.

That’s why it’s so important that everyone in Southern California does 2 things: get smart, and get prepared.

If you weren’t raised in California, earthquakes were probably a foreign topic that were discussed in passing. Maybe they were on that one science test. But even if you did grow up in California, it’s not always easy to understand what causes earthquakes (which helps us predict them). So, if you already know, you can skip this (even though it’s about to blow your mind). Here’s the science behind it, in the most simple, easy to understand form ever written:

Let’s start with an experiment: this is a fun one to do with family, but you’ll get the point just by reading. Let’s say you take a normal, red brick, and attach a bungee cord to it. Then, you take a strip of sandpaper and glue it to a surface that won’t move (like a table or the floor). Set the brick on top of the sandpaper. As you pull the bungee cord slowly, you’ll notice that the brick isn’t just going to slide along gracefully. What will happen is, the energy of your continuous pulling will keep building up. And then, all at once, the brick/bungee cord will use all that built up energy to jerk forward. If you continue to pull the bungee cord, you’ll see this happen over and over- sometimes in smaller bursts and sometimes in bigger ones. Sound familiar? You can see a rough example below. 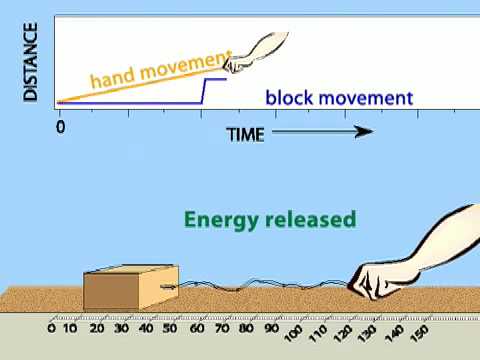 The surface of the Earth is covered in tectonic plates (see the picture below), which shift over millions of years. But it’s the way they shift that’s important. It’s not some smooth, quiet movement. It’s exactly like what you just saw with the brick and sandpaper- the movement occurs all at once. It’s a sudden release of all of the built up energy.

As you can see in the photo above, part of California sits right on the edge of the Pacific Plate; the rest of the state (and continent, for that matter) lies on the North American plate. The image below shows in greater detail the tiny portion of the state that is caught up in it. (Note that Los Angeles is included).

That line that separates the Pacific Plate from the North American Plate is called a fault. To be specific, the San Andreas Fault. Basically, in a million years or so, with the movement of the plates, Los Angeles will be up by San Jose (crazy right?!). The image below has two blue arrows that represent which way each plate is traveling.

Basically, the longer that energy accumulates, the more intense the earthquake will be. And it’s been accumulating. Since 1857, the movement along the San Andreas Fault has averaged more than an inch. That might not sound crazy, but when it comes to an entire continent shifting over an inch a year, that’s a big deal. While Los Angeles typically follows a pattern of roughly twenty-year intervals, the San Andreas Fault has a serious one roughly every 100 years– and it’s been 160. Just so you understand how serious it is: the shaking could last for minutes (versus the Northridge quake’s 15-seconds), and could displace land by roughly 9 feet– if it’s a 7.5 as expected. If the quake hits with a 7.9 magnitude, as much as 20 feet could shift. It’s the stuff of folklore. The movie “San Andreas” was created as a dramatization of the possibilities of the quake, but if an 8.2 magnitude quake struck Los Angeles, the energy it would produce would equal far more than that exerted by the atomic bomb in Hiroshima.

Alright so hopefully you’ve now recognized just how critical it is that we prepare, as a community and as individuals, for what is coming. We may not know when, but we know a massive quake is on its way- and if you’re prepared, the amount of suffering you and those around you will experience will be minimized. Here are some simple ideas for making your home “earth-quake proof”. Even if you conquer the list one thing at a time, within a few months you’ll be able to sleep with much more peace of mind (unless, of course, it happens before then. In which case, we tried).

After the Dust Settles: